The global biotechnology industry and large integration: the future of cancer may be just cold field 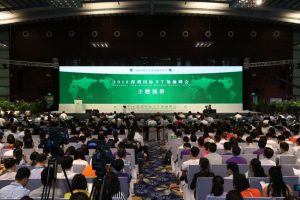 SAN FRANCISCO Sept. 22 news, about 800 domestic and foreign well-known areas of life and health and biological scientists, entrepreneurs and other industry leaders today brings together BT 2016 Shenzhen International Leadership Summit, at the summit, “the development of green economy and create a better life” theme , the experts on the hot issues of industrial development, to carry out academic exchanges, research policy and industrial cooperation to promote the rapid development of domestic life and health and biological science and industry.

Cancer in the future may be just a cold field

As early as 1993, Dr. Royston A Buddha from the University of California, San Diego School of Medicine on the use of the concept of fully human antibodies, employing lymphocytes and tumor cells, bone marrow cell fusion to try to treat cancer, a Japanese woman. He said: “We now have the ability to more targeted therapies, the drug against cancer of the mutant cells can be more effective against cancer cells.”

The precise medical experts marvel at the “Shenzhen speed”, the world’s leading biotechnology Santiago to China this huge market demand of Clinical Oncology, the “Trans-Pacific cooperation in the new model of tumor accurate medical industry” to Shenzhen, and Chinese enterprises and professionals to cooperate in research and development of medical precision tumor, they hope, driven by technology research and development in the future, the cancer can become a “little cold.”

As part of the precise biological treatment medicine, it is widely used to solve immunotherapy, gene therapy, stem cell therapy and other treatment of major diseases. First, immunotherapy is making significant progress. Genetically engineered cell-based therapy, the target cell is about to be removed and re-engineering modifications reinfusion, have successfully treated cases of leukemia. Secondly, gene therapy has entered clinical development. Currently, there are two thousand patients in the clinical use of gene therapy, the drugs are approved in Europe and other countries have entered the clinical treatment; R interfere with gene therapy treatment on the basis of ovarian cancer drug treatment and other projects being carried out in the genes treatment of genetic diseases has also made outstanding achievements. In addition, there have been 13 kinds of stem cell therapy products have international approval and European and American market. Corneal stem cell transplantation, GVHD have national treatment to clinical use.

Wei has repeatedly stressed Mr. Yu Quan, more biological treatment and drug research is how quickly converted into products. 8 consecutive years of annual investment of 50 million funds for the research and development aspects of the major Pharmaceutical Group is also active, to jointly promote the development of biotherapeutic and biotechnology drug research, clinical treatment of major diseases will also be made on the basis of an unprecedented breakthrough.

BT big health innovation era Chinese have their own characteristics

At the high end of the dialogue session, Professor of Brain and Cognitive experts, Tsinghua University, Lu white lead us to “the era of big health industry BT innovation circle” engaged in a fierce discussion. Professor Bai Lu pointed that the development of Chinese high-tech industries need to go out their way. Over the past few decades, China’s development has been due to the developed countries to catch up. Today, China’s economic strength has been fully equipped, can make their own achievements in the field of technological innovation, system innovation and cultural innovation is a key factor.

Tiantan Hospital, vice president has a wealth of clinical experience, Chinese Academy of Sciences Jizong that from translational medicine to precision medicine, the fundamental core concepts on the basis of combining biology, computing, physics, optics, materials, and between physicians, only this tight fit to be able to promote the development of our medicine.

National Academy of Sciences of the original Robert DeSimone shared his elite scientists and IT engagements in the work interesting. On how to attract a scientist, he stressed that the development of a good ecological environment is an important factor in attracting talent, which is why in recent years, China has attracted a large number of scientists, the real reason. Then American Memorial Sloan – Kettering Cancer Hospital, Professor Ding Xiao Patel also expressed a strong interest in the Chinese research environment and industrial development, pointing out that the immediate wish to participate in China in the future in the field of construction and development.

Chinese industrial innovation with BT’s strength is the consensus achieved in the dialogue agreed. In the future, how fast technology into products and put into clinical, establish their Chinese Characteristics BT industry environment, the Chinese market long way to go.

Previous: The project was burn but it is China’s hope for the future of biotechnology Next: ACS Publications